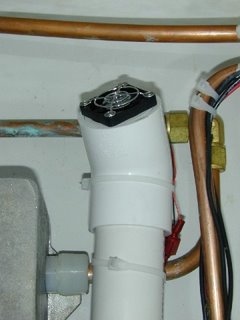 Here's an equipment tip from Bill - A slightly different version of this write up also appeared in the April 1, 2004 issue of Practical Sailor as a letter to the editor.

We used to have a problem with stuff in our boat fridge freezing and goodies in our freezer defrosting. Also, the bottom of the two boxes was around 10 F colder than the top.

Our unit is a holding plate model that relies on convection to move the air around in the box.

After a long diagnostic process, I determined that the easiest way to fix this problem was to add fans to the fridge and freezer to mix up the air

Commercial units are available ranging from $40 to over $100, but we built our own for under $10.

Granted, a high-quality unit manufactured and sold by a small business is generally more expensive than a DIY project, but fabricating an equivalent unit from a few parts is so trivial that even the most thumb-laden boat owner should be able to do it.

What used to be a 10-degree difference between the top and bottom of our refrigerator and freezer box is now uniform. The important test is that the lettuce doesn’t freeze in the fridge and the steaks don’t defrost in the freezer.

The 63-cent fan guard is Jameco part 123502CP. The pipe is 1.5” PVC (available at any hardware store) with your choice of 45- or 90-degree elbow. Plus some miscellaneous parts—wire, connectors, fuse, fuse holder, some screws, tie-wraps and/or double stick tape. Total cost: a few bucks.

2. Attach your pipe to elbow. Put a short stub of PVC in the other end of the elbow so you can use four little (#4) screws to attach the fan and fan guard to the PVC (see picture). Note: We didn’t glue anything—the snug fit was sufficient.

3. Wire up the fan to your boat’s 12V electrical system—be sure to follow proper wiring procedures. We ran the wires through the same opening in the side of the box that our refrigerant tubes pass through, and sealed things up with modeling clay. We connected two fans (one for the fridge, one for the freezer) through a fuse holder and 0.25-amp fuse to a circuit that’s always on when we’re running the fridge.

4. Attach the assembly to the inside of the box. We found it convenient to use tie-wraps, but double stick tape would also work fine.

Building the fan tube took less than 15 minutes. Mounting the two tubes and running the wires took a little over an hour.