We moved from "SBC/Yahoo" to "1and1" a very highly rated service. You don't have to do anything different, the changes were all on our end.

We did this to improve our capabilities and lower our costs.

Yahoo's web service level was reasonable, but their customer service was poor and their prices were too high. We're saving more than half the cost of running our site by switching. Also their tools are a bit better.

Note - Our BLOG remains with Google's Blogger.com. We're very happy with this service.

We got to arrived in Seattle Wednesday night, March 15th as planned. The rest of our time in Seattle was spent wrapping up the boat maintenance with the various repair folk. Since we arrived in October, we had 4 separate teams working on different systems. So our week was taken up by checking out all the work and finishing up the final tasks.

Finally we had some time to see our friends, Chris and Julie on Kona Trader who were over at Bell Harbor Marina - about 2 miles from Lake Union. We also got a few hours to visit Pike Place Market and do something besides shopping for boat parts.

Wednesday the 22nd, Charlie Stillman from Discovery Yachts came along with us as we "locked through" and headed back to salt water for the first time since mid-October. Of course, it rained off and on most of the day.

That evening friends from Powell River came over to our slip at Shilshole Marina, just outside the locks, still in Seattle. Bonnie and Wilf Rennecke were in town visiting family and we had a nice dinner at Anthony's Homeport - a nice seafood restaurant right near the Marina. Bonnie and Wilf have a Baba 40 "Warlord". We met them last summer at the "Perry Design Rendezvous North" (Bob Perry designed both their boat and ours) that they organized in refuge cove in Desolation Sound.

The weather forecast was for gale force winds on Thursday, so we delayed our departure to Friday.

This morning (Friday) we checked the weather and it looked a little better. The wind was at least forecast to be behind us for a change, so we went for it! Just as we were about to depart a squall dumped on us and we almost decided to wait another day. But if we waited, the wind was forecast to be on our nose! Fooey!

After the squall passed, we cast off with rays of sunshine peeking out from the clouds. It was a bumpy ride most of the way, but with a staysail only up we were able to make really good time. At times we were hitting 9+ knots. It was windy and cold though and we did get dumped on by 2 or 3 squalls as we headed up Puget Sound.

The strongest winds were around the headlands along the way at "Point no Point" and "Point Wilson".

Our records was broken... In 6 years of sailing on Raptor Dance, today was the first day we actually needed and wore our foul weather gear. We didn't wear it all day though... Thus the theme for today. Here's what we looked like shortly before putting on the foulies: 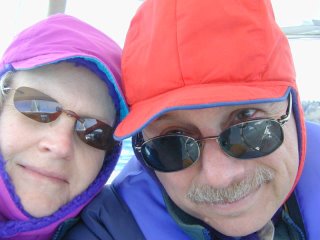 They do keep your ears warm though!

The second picture shows Mary, modeling our foul weather attire as we passed Point Wilson. Note the whitecaps in the background. 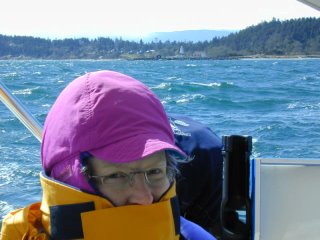 We were doing fine until we entered the Straights of Juan de Fuca. Then the wind increased and we had a really bouncy half hour or so until the wind died totally!

Off came the foulies and back to normal attire.

Then the wind shifted to the west and was back on our nose! The forecast wind shift hit a day early!

So slogging into the 25 knot winds for the last 14 miles took much longer. As the tides were with us and opposing the wind, the seas got even lumpier! Good thing we have such a solid boat! These Valiants are delightful!

Anyway, we got into Victoria safe and sound at 445 PM after a lumpy, but otherwise uneventful day.

We're going to hang out here until Tuesday or Wednesday, then head up to Sidney. We'll park the boat and probably head back to the house around April 1. We'll fly back and resume our cruise the end of April, when the weather warms up a bit more.

We'll probably take Kenmore Air to get back to our car... Woopie! We'll get to ride a seaplane!

That's the news from Raptor Dance. Drop us a line and let us know how your doing. We have wireless Internet at the dock in front of the Empress Hotel!

Hello everyone!
It's been a while since we last emailed.
We've been off the boat at our Vacation home in Sonoma County California catching up on home chores.  Some minor repairs, replaced the oven and range hood, remodeled the old closet where the furnace used to be, reworked some of the kitchen cabinets and generally getting the house ready to leave again!
We've also updated our website and changed our web hosting and domain registrar.  You don't have to do anything different, just go to http://raptordance.com as always.
Note though if you have any bookmarks, links, etc. that go to raptordance.us, you need to change them to go to raptordance.com!
We changed the layout of our website.  Some of the new things we've added include a list of "Quick Links" on the homepage to make it easier to get around and a database containing our Recipes!  Go take a look.  Let me know what you think!
We are planning to drive up to Seattle to get back onboard in two days on Wednesday, March 15th.  We'll stay in Seattle on Lake Union for about a week, going back out the Lake Washington Ship Canal and the Hiram M. Chittenden Locks on Tuesday or Wednesday, March 21 or 22 see:
http://www.nws.usace.army.mil/PublicMenu/Menu.cfm?sitename=lwsc&pagename=Navigating
We will overnight in Shilshole Marina or Bell Marina before heading back to Victoria and Sidney (route to be determined, based on who's around to visit with!).
We're planning on docking Raptor Dance in Port Sidney Marina http://www.portsidney.com/ for the month of April and heading back to Sonoma for a good part of April.  Since we'll have left or Jeep at Lake Union, we will come back via either the Victoria Clipper http://www.victoriaclipper.com/ or Kenmore Air http://www.Kenmore air.com/ and drive the jeep back.  Later in April we'll fly right into Victoria Airport, which is actually in Sidney.
In May we're planning to hit the highlights we missed last year, including Princess Louisa Inlet.  We'll also visit some old favorites.
In June, we're planning to leave around June 6 to 8, weather permitting, and sail nonstop to San Francisco Bay.  We're signed up with Commanders' Weather http://www.commandersweather.com/ to maximize the probability of leaving during a good weather window.  We'll most likely leave from Port Angeles in Washington.
We're planning to take two crew with us as this should be about a 6 day passage.  We have two "probable" crew members, but they're not yet 100% certain they can make it.
That's the news from here.  We'll update you next when we leave Lake Union.
Warmest Regards,
Bill and Mary
No comments: